The method presented below can be used to track any log attribute in Splunk; this example demonstrates watching MD5 hashes of executed files and loaded modules.

and configured it to provide MD5 hashes for these as well.

Now that we are receiving hashes for all executed files and loaded modules, let’s start tracking them in Splunk.

First we’ll need to create a lookup table, there are a few ways to do this, a quick way is simply:

This will create an empty csv file named “md5tracker.csv”.

Next, we need to search for and add the desired data to the csv file. I like to preserve some of the metadata that WLS reports with each record for later use – avoid re-searching, etc.

OK, let’s break this down:

Remove records that already exist (field will be non-null): where NOT LookupFirstSeen LIKE “%”

After the first run, you should have the results from your chosen time period now stored in md5tracker.csv

You’ll want to save this search 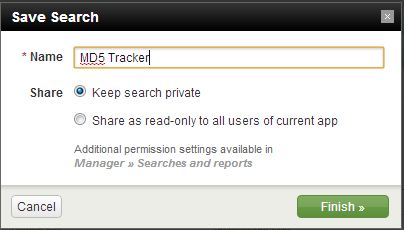 and schedule it to run every x minutes for the last x minutes; I schedule mine for every 15 minutes. 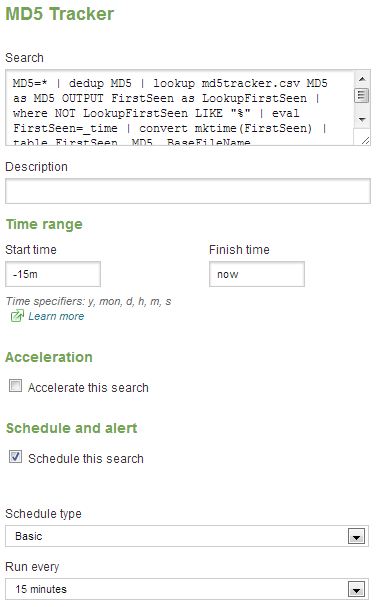 Once this is complete you’ll now have a search that keeps your lookup table up-to-date. Now what?

What you do next depends on how closely you feel this needs monitored. I run a second search every x minutes that alerts on all new entries in the last x minutes (based on the FirstSeen) field.

I also like to take an export of the hashes every so often and check them against Team Cymru’s malware hash registry – https://hash.cymru.com/

Export the results from Splunk, open the file in a spreadsheet, and copy/paste them into Team Cymru’s lookup for a quick analysis. An enterprising person might also create a custom Splunk command that uses their DNS lookup service (https://www.team-cymru.org/Services/MHR/#dns) and puts the results into the lookup table itself…

I currently have 23,537 executable hashes and 131,885 module (dll, etc) hashes, and see a few new ones at most search intervals during normal business hours. After the initial gathering, the periodic alerts are easy to quickly review, and you’ll know everything that is running on your Windows hosts.

there's a hat for that!

A blog about Armitage, Cobalt Strike, and Red Teaming

A Geek Raised by Wolves